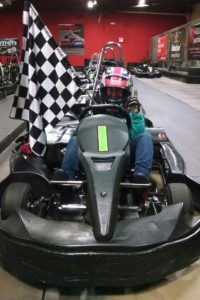 Astrid may be 12 years old, but don’t let her age and size fool you.  In her short lifetime she has been involved with all kinds of racing whether it be NASCAR, ARCA, IMSA or the local dirt track. Astrid has been karting and volunteering in motorsports since the age of 8. Her father Scott Lynn and stepmother Michele Lynn are greatly involved in both the grassroots and professional arenas of racing. Astrid’s love affair with go kart racing began as soon as she could talk, and she became involved in the junior racing series when she joined the Somerset County 4-H Go Kart Club in 2011/2012. Astrid is also involved with a motorsports charity her parents started, which has allowed her to meet motorsports elite from all over the country. 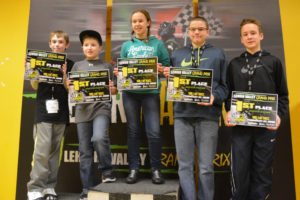 Astrid says she loves “anything with wheels, cats, dogs, cello and music.”  Her favorite car is her Dad’s Porsche 911 who she also says is her greatest personal influence and her hero. Her favorite race cars are  Brumos Porsche 911 #59, Magnus Audi R8 #44 and #22 Sprint Cup Ford Fusion, yes Joey Logano.  Her favorite track is Daytona International Speedway, Lime Rock Park – CT.  Her pet peeve is when someone pit maneuvers her after she just paseed them “fair and square”.  Her favorite movies are Cars and Titanic.  She donates all  proceeds from her online shop to benefit animals in need at the St. Hubert’s Animal Center, a non-profit dedicated to the humane treatment of animals.

Astrid is a rising star in the racing world and we are thrilled to have burn it up on our track in our junior racing league at the Lehigh Valley Grand Prix.  Follow Astrid on Twitter and Facebook @astridlynn22 and on her website astridlynnracing.com for up-to-the-minute news on this rising star in the racing world, and catch her during Junior Racing League at Lehigh Valley Grand Prix.